Elms Hotel (Retford) at a glance:

The Elms Hotel is a Grade II Listed Georgian house built in 1792 on the old Great North Road from London to York, originally an affluent private residence. At the rear of the property, extensive landscaped grounds are bordered by mature trees with a converted stable block.

The hotel is located in the Nottinghamshire market town of Retford where a weekly market has been held for 750 years, following the granting of a charter by King Henry III in 1246. Many of the buildings forming the town's spacious market square are also Georgian, with the exception of the chateau-like Town Hall, which features a chandelier and ornate ballroom.

Retford offers easy access to the A1, less than 10 minutes away, and Retford station is on the East Coast Main Line with fast, frequent access to London, York, Leeds and Edinburgh. Doncaster's Robin Hood Airport is less than 15 miles away, and larger towns and cities including Sheffield, Doncaster and Lincoln are all within easy reach.

After serving as a private residence for over 150 years, Elms House was used as an army barracks during the Second World War. Built in 1792 and a Grade II listed Georgian building, it became an elegant hotel post-war, with additional rooms added when the rear stable block was tastefully converted.

The nearby countryside is often referred to as Pilgrim Country as many of the early settlers of Massachusetts originated from the villages of Babworth and Scrooby on Retford's outskirts.

The town itself sits in a valley through which the Chesterfield Canal and River Idle pass. Indeed, the town's original name of Redford arose from an ancient crossing point over the river that, due to clay in the riverbed, often ran a faint red.

Fire led to large parts of Retford being destroyed in 1528, but prosperity returned once the Great North Road (now the A1) was diverted through the town in 1766. Links were further improved when the London to York Railway was routed through the borough in 1849.

Today, Retford continues to prosper thanks to the excellent road, rail and air transport links, and The Elms Hotel continues to offer a warm welcome to guests visiting the area for both business and leisure. 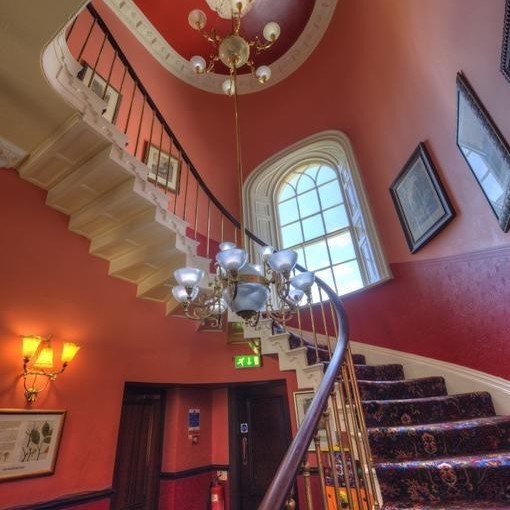 Centre point of the town is its ornate Town Hall. Echoing the design of a French Chateau, the Grade II Listed Building features a magnificent staircase leading up to a ballroom.

The hall sits at the edge of Retford's picturesque square that, every week from Thursday to Saturday, is transformed into a thronging market selling everything from fresh flowers to fine antiques.

Close by is The Broad Stone. In times of plague, a hollow in the stone was said to be filled with vinegar to disinfect coins being carried by people to the market. Nearby is a cannon captured during the siege of Sevastopol in 1859.

This beautiful expanse of parkland, heath and woods was once the country estate of the Dukes of Newcastle. Now managed by the National Trust, the extensive grounds contain a Gothic-style chapel, a walled kitchen garden and a magnificent lake. The idyllic setting is the perfect place for secluded walks and exploring with family and friends, including the majestic 2 miles of Limetree Avenue.

Once home to England's most famous outlaw of legend, Sherwood Forest was originally designated a royal hunting forest that extended into several neighbouring counties alongside Nottinghamshire. Now measuring just over 1,000 acres, the forest is a National Nature Reserve with waymarked trails taking you through some of its most interesting spots. Admission is free.

One of the capital cities of Anglo-Saxon Mercia, this attractive Lincolnshire town was named after the Gaini tribe - King Alfred married the chief's daughter Ealswitha in 868. The Danish king Canute is reputed to have attempted to turn back the tide here on the River Trent. The town boasts several interesting historical buildings, including a well-preserved 15th century manor house, Gainsborough Old Hall, and the remains of a medieval church with links to the Knights Templar.

Just over 30 minutes drive from The Elms is the beautiful and historic city of Lincoln, with its spectacular 12th century cathedral and well-preserved Norman castle. The city also boasts a vibrant centre with shops, fancy tearooms, cafes and restaurants including the legendary pie shop Browns, frequented by TE Lawrence, better known as 'Lawrence of Arabia'.

The magnificent Bolsover Castle was built by the Peverel family in the 12th century. Its highest point, known as Little Castle, was completed in 1621. A Scheduled Ancient Monument, the castle is maintained by English Heritage and offers spectacular views over the Vale of Scarsdale and the Derbyshire landscape.

An ordinary-looking semi-detached property in Worksop, Mr Straw's House gives visitors a fascinating glimpse of life back in the 1920s. Originally owned by a grocer, the family chose to live without modern comforts, instead preserving everything from its period wallpaper to its kitchen shelves stacked with pots and jars. The house was given to the National Trust and advance booking is recommended.

Hotels in Retford | Hotels in Nottinghamshire | Places to Eat in Retford